Ewa Bien is a Polish brand which was brought to my attention by Venusian*Glow and Miss Underpinnings.  With Katarzyna from the Ewa Bien shop, we identified 75J as my likely size given my usual UK size of 34GG.  There weren’t many bras left in this size, which is near the end of the range (Ewa Bien goes up to a European K), so I settled upon the Maja because I like red.

I was quite disappointed that I had to forgo so many beautiful bras like the Anubis, Masai, Neprii, Dire, Egenia, Pares, and Hora.  If that seems like a long list of regret it is because the Ewa Bien aesthetic really appeals to me.  I figured the Maja, if not my favorite, would at least allow me to figure out if I could wear Ewa Bien, so that I could get an order in without worrying about sizing when new designs are released.

The bra arrived in its own little box, reminding me of long-ago days when I could still buy bras in my size in boutiques. 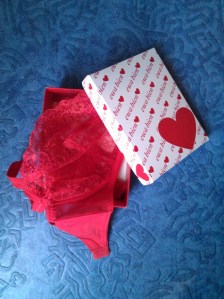 I was startled by the intensity of the color, which was much brighter than I’d expected.  The Maja is beautifully sheer with looping embroidery. 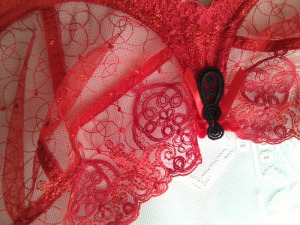 Often sheer bras are scratchy, but the Maja is unexpectedly soft in the cups and the band almost glides through your fingers.

The straps are very adjustable.  They are long, and I had to tighten them quite a bit to get lift, but there was still plenty of room to shorten them further.

The band was comfortable.  If you routinely wear two band sizes, it is probably safe to go for the smaller one.  The cups were less of a success.  I had some gaping at the top in certain angles, although in general the fit was good.  A standard UK to European conversion seems like the best way of finding your size in Ewa Bien.

The gore proved to be the biggest issue.  I close-set softer breasts.  Bras with less sturdy wires, such as those made by Freya, are usually pushed outward even if the cup shows no overspill when the gore is held flat against the sternum with a finger.  With this bra, the side of the gore nearest to my smaller breast remained flat while the other side turned out so that it was lying flat against the side of the breast, at a 90° angle from my breastbone.  This isn’t exactly uncomfortable, but it isn’t ideal and I intend to see if I can alter the gore to make it a few centimeters narrower.

I liked the look of the bra both without clothing and with it.

Although the Maja wasn’t a perfect fit for me, I was quite satisfied with the appearance and comfort of the bra, and the accuracy of the sizing chart.  Ordering by email was simple, and the shop was helpful about pointing me to bras which were available in my size.  The limitations of the size range are my biggest concern about this brand.  Ewa Bien will only fit the smaller end of the big bust market, and has limited offerings in these sizes, which makes it an exercise in disappointment to browse through the many lovely swimsuits and bras.