Tutti Rouge, a new full-bust brand currently available exclusively at Bravissimo, has been the source of a great deal of excitement recently.  The first bra to be released, the Liliana, has been the subject of a number of blog posts: Fuller Figure Fuller Bust, Invest in Your Chest, the Lingerie Addict, the Lingerie Lesbian (also part two), Sweet Nothings and no doubt others I’ve overlooked.

Bright pink with a coral tint, partially padded and with heart-shaped strap sliders, the Liliana is not at all to my taste.

There were so many reasons that I didn’t expect to like this bra and the girly aesthetic was the least of them.  Bravissimo describes it as having a lower gore, which made me fear it would resemble a plunge bra, pushing my softer breasts into close proximity with one another and not doing my sensitive skin any favors.  The lace and ribbon detail at the top looked like it would show under clothing.  Early reviewers described the cups as shallow and running small. As someone with bottom-heavy teardrop-shaped breasts, I require a lot of projection in the bottom of the cup to avoid wrinkles.

I ordered the bra in the smaller of my two usual band sizes and in my normal cup size because I placed the order before I’d read reports on the sizing.  This turned out to be the correct size for me.  The band is comfortable.  It is looser than what I expect from Panache, but a bit tighter than most Freya bras.

Contrary to my expectations, I did not see a lot of wrinkling at the bottom of the cup.  My breasts fit in the cup quite well.

The bra certainly has less projection than many other bras I own.  The shape was characteristic of what I’ve observed with other shallower bras such as the Curvy Kate Tease Me or Thrill Me.  In profile, it resembles the distinctive Curvy Kate Showgirl shape, but I didn’t need to go up two cup sizes to achieve it.

I didn’t get cakes on a plate, which I’m accustomed to seeing with the Curvy Kate Showgirls.  The bra did add some curve to the upper part of my breast, which is naturally a steep 2 shape.

Fears of it resembling a plunge bra were quickly laid to rest.  I was pleased with the amount of separation between my breasts.  It’s what I’d consider comfortable for everyday use.

The lower gore is a benefit for anyone with close-set breasts who routinely struggles to get the gore to lie completely flat in limited space.  It fits under clothing which would normally require a plunge bra. 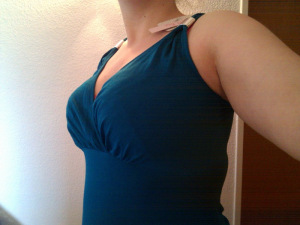 However, the detail at the top can be seen under some fabrics, defeating some of the purpose of padding the nipples.

The Tutti Rouge Liliana was a success for me in terms of fit and shape, although it is more noticeable than I would like under some clothing.  I am looking forward to Tutti Rouge’s next offering with some eagerness.  Maybe the next release will also please me with its appearance as much as the Liliana did with its fit.